Fall Sports in PPS gets washed away 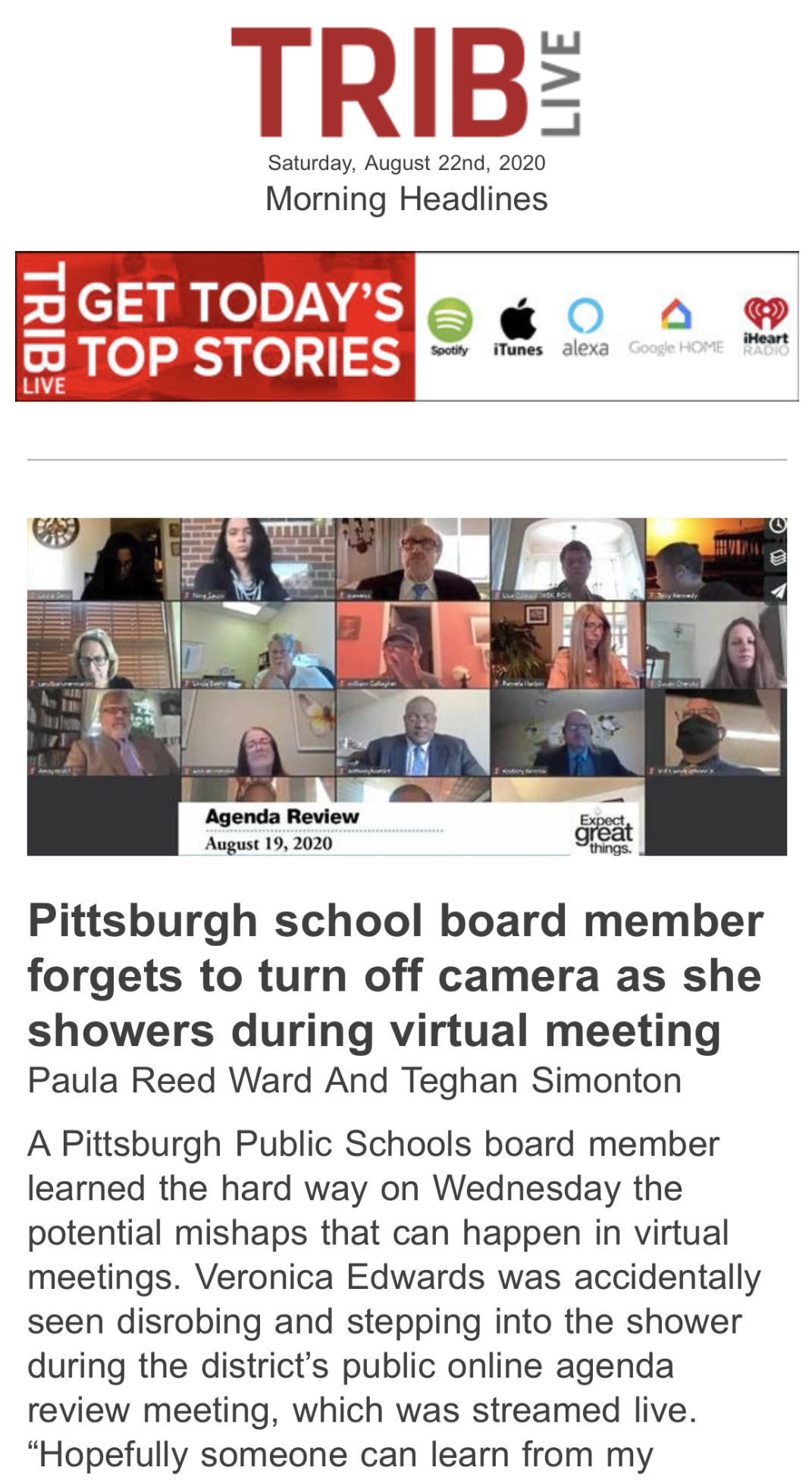 Elected School Board Member serving the District of Pittsburgh Public Schools went for a shower in the middle of a meeting and had her Zoom camera still active. At the time, only citizens noticed as others in the meeting didn't see it. Later deleted.

Fall Sports in PPS gets washed away

Most of the discussions on the sports topic at the meeting were pulled into this video.

More newsworthy than sports: End game to school attendance in 2020 seems near.

Board member, Sala Udin, wants to talk about holding only virtual classes for school to the first of the year. But, they failed in the spring. And, now the plan is to catch up this fall. Whew. Dream on.

Plus, the push for PPS is for synchronous teaching and not asynchronous. Trouble looms large.

Oh, and did you catch the reason why all this is unfolding now? It was because of prior talk with one of the board members -- and its due to a jinx. Yep. That explains it. She jinxed it. Now we suffer.

Of course the coaches were not kept aware nor engaged with any input within the decision process about the future of scholastic sports in Pittsburgh Public Schools. Why would PPS entrust the student-athletes with the coaches but not give the coaches email addresses, keys to the facilities nor the courtesy of a coaches meeting? Hell, why give the coaches any input when the teachers are left in the dark as well?

Most troublesome:  Asynchronous learning is frowned upon.

This is going to be another nightmare. Of course, everything should not happen in an asynchronous mode. But the aim for teachers teaching in front of the screen full time is ridiculous, especially for the older grades.

Lazy is a four-letter word.

If the option is to do nothing or else do something, especially if that something is going to bring more work into the process -- they are always going to choose to do nothing.

The answer is, "PPS won't be in the playoff picture!"

Board member Gallagher, a long-time coach himself, asked a pointed question. So, if the teams are not able to have any competitions nor practices while the PPS students are in virtual only educational settings, will the school teams take part in the PIAA Playoffs?

How clear does that have to be. None seemed to want to express an answer.

This week is not like it was two weeks ago in terms of PIAA progress in sports.

Since PPS made the decision about stopping sports, others have caused some changes. "Push em back! Push em back! Way back!" The PA Governor has changed his tune, to a large degree. There is going to be sports in many places throughout the state.

Yes. The City League, District 8, is part of the PIAA. Plus, a few of the sports teams are in the WPIAL too.

Students that are in music are in an academic activity. Would be good if the people at the table talking about and discussing the outcomes of different programs would have a clue as to what's what in the life of the students as to the various program offerings within the district. Sure, bands are bands. They have an occasional chance to go to a football game. But some clarity would be welcomed, especially from someone other than the solicitor. Ugh.

X-Country Meets can be run in much smaller waves or else in a fully time-trial fashion.

Getting a hundred, or even a few dozen kids together to toe the starting line of a cross-country race is going to be a thing of the past. That's not prudent in a pandemic. Of course. But, an individual or pair of runners could be sent off every 30-seconds. Then the big group could be spread apart.

The typical rules of the games need to change. Flexibility is needed. But the kids can race, even if it is on different days!

The number of competitions might need to be adjusted too, of course.

It is possible to conduct safe golf matches and cross-country events -- and hold the practices too -- in safe, responsible ways with new, different sets of rules and leadership.

Doing nothing is worse.

Of course students and families are fleeing the city, still.

The departure of talented youth from the city schools is epic. Families that can go, often do.

Pittsburgh is a sports town, in spite of what many do to combat it.

I had high hopes when a new superintendent was hired who had been a NCAA DI athlete. Plus, he was a father to a college-scholarship student-athlete too. Oh well.

There was a time, in the distant past, when a sports reform task force was formed. We did make some progress. Then came Linda Lane. But, the whole concept of being nimble is foreign to PPS.

There is so much to unpack at any PPS Board Meeting.

It was only a few years ago when there was a letter about a certain agency and the opinion of many to not renew a certain contract. But this institutional knowledge is absent? You go Pam.

Soap on a rope?

Others can talk about that.

Statement to the PPS Board & Administration

City League football coaches are worried about losing their season, but they’re also fearful they could lose the entire league.

“If we don’t play football this year, we won’t have City League football in a couple of years,” Allderdice coach Jerry Haslett said.

Pittsburgh Public Schools’ administration recommended earlier this month that fall sports be postponed over covid-19 concerns, a decision that left coaches and athletes in limbo. They could learn this week whether they’ll have a football season this school year.

Their worst-case scenario is a cancellation.

“I’ve been coaching in the City since the mid-90s, and it would destroy us,” Brashear coach Don Schmidt said. “We may not come back from it, to be honest with you.”

The school board meets Wednesday.

“We’re just hoping for a season in any capacity,” Schmidt said. “We understand both ends of what’s going on. We want our kids to be safe. But it’s a real tough situation for us because we don’t want our kids to go anywhere else.”

Head coaches from the six City League football teams discussed their situation during a video conference call Sunday night. WPIAL schools are moving ahead with their football seasons, so there’s growing concern that a number of City League athletes will transfer elsewhere.

Haslett, who’s also an athletic director at Allderdice, provided a few options for a delayed season. One scenario starts the season in mid-September. Another has season openers the first week of October. A spring season starting in March was a third option.

“As long as they get these kids on the field, that’s my biggest thing,” said Donta Green, who coaches Westinghouse, the defending City League champion. “It would be heartbreaking for a lot of our seniors and juniors not to have a season this year. We’ll take whatever we can get.”

Green agreed that a lost season could doom the City League.

“Especially if everyone around us was playing and we’re not,” Green said. “I think we would see a large number of transfers. Kids would go play at nearby schools that have football and it would be hard to get those kids back.”

“While we understand the valuable role strong athletic programs contribute to our overall student experience, our number one priority is student and staff safety,” Hamlet said. “We are confident the postponement of fall sports is the best decision, but we understand that this is disappointing news for some of our students and staff. We are exploring the possibility of an alternate schedule if and when students return for an in-school blended model.”

The statement provided no timeline.

“They can’t tell us if the kids are going to have a season,” Haslett said. “I want to know if we’re going to play something. I don’t care when. Tell me when. If you can’t give the kids that, we’re done.”

The City League made its decision to postpone before Gov. Tom Wolf strongly recommended youth sports be delayed until at least January. The PIAA board ignored that guidance Friday and allowed fall sports to continue as scheduled.

However, the PIAA board also laid groundwork for an alternate fall season in the spring.

If needed, that alternate season could be available to the City League, the Philadelphia Public League and other groups that don’t compete now. Pittsburgh Public Schools athletic director Karen Arnold on Friday said that option would be considered.

“It’s sad,” Haslett said. “I’ve got at least 10 kids who could be going to college. You can’t leave these cats hanging.”

Chris Harlan is a Tribune-Review Staff Writer. You can contact Chris by email at charlan@tribweb.com or via Twitter .