It is very bad when the faculty raises a vote and elects a no-confidence message saying, “Fire the Athletic Director!”

Published a few months ago in Elsewhere - 0 Comments 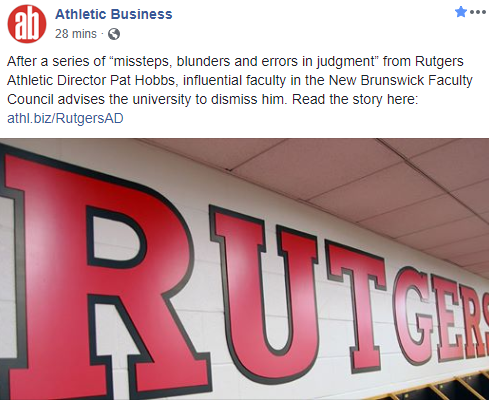 Source of original article at the Athletic Business

The resolution passed this week by the New Brunswick Faculty Council, a group that advises New Brunswick chancellor Christopher Molloy, requests Hobbs' dismissal and other significant changes in the athletic department in response to what it called a series of “missteps, blunders, and errors in judgment.”  NJ Advance Media obtained the resolution, which blasted Hobbs and the athletics department for the football program’s prolonged lack of competitiveness, a multimillion-dollar payout due recently fired football coach Chris Ash and the school’s alleged weak response to accusations this fall of widespread emotional and physical abuse within the university's softball program.

“Unfortunately, in recent years, the Rutgers athletics program has done little to enhance the image of Rutgers, but a great deal to sully it,” according to the resolution, in which 58 percent of faculty members voted to have Barchi fire Hobbs and appoint an interim athletics director, and 34 percent voted for the university’s Board of Governors, Barchi and Molloy to “make whatever changes are necessary in the administration of the athletics program, starting at the top, to ensure that the quality of our athletics program is consistent with the quality of the university.” Only 7 percent of voting members favored taking no action.

The faculty group also called on Rutgers to tap outside consultants to “conduct a complete review of the program's past failures and formulate a detailed action plan to reform its management and finances.”

The university responded with a vote of confidence in Hobbs. “Pat Hobbs has the full support of the President and the Board of Governors,” said senior director of news and media relations Dory Devlin in a statement. “He has brought about important and meaningful improvements to Athletics and we fully believe that he will continue to do so.”

In 11 previous seasons at Rutgers, Schiano amassed a 68-67 overall record, including six bowl appearances and five bowl victories. He left Rutgers in 2012 to become head coach of the NFL's Tampa Bay Buccaneers, who fired Schiano after two seasons.