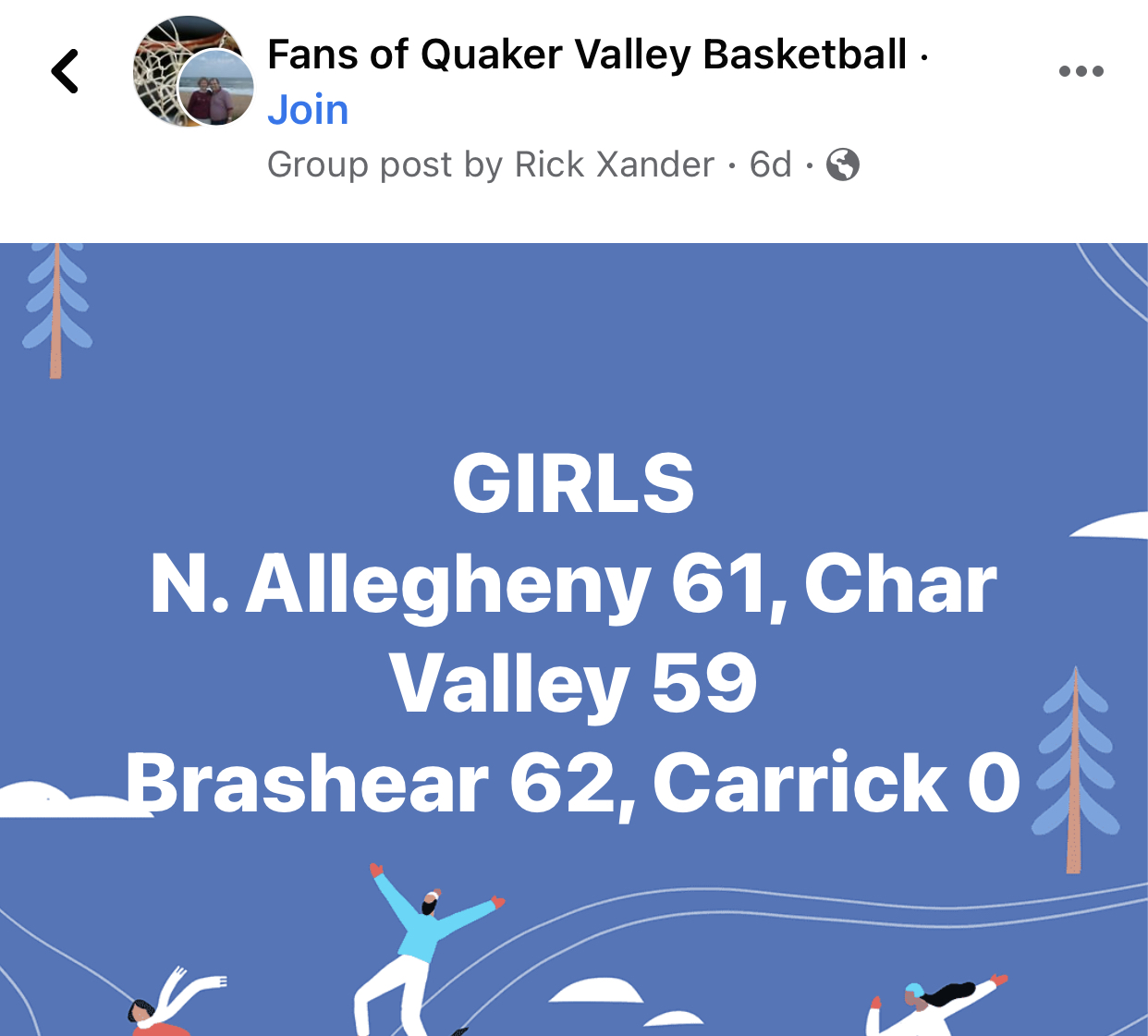 In a game like this, more context is needed. But, it is fair to say that not many had a good time in this game. Relationships were hurt, not built.

The Post-Gazette's Mike White gave some coverage of the game some days later. Go figure.

Brashear High School girls basketball coach Jerry McMeekin said he doesn’t get why an article would be written about his team’s recent game against Carrick, and doesn’t understand the criticism he and his team are taking on some social media posts.

He doesn’t understand the fuss about the final score of the City League game last Friday: Brashear 62, Carrick 0.

This wasn’t a football game. This was a shutout in a high school basketball game. Yes, a team put a bagel on the scoreboard in basketball. It was Carrick’s first game of the season and they walked off the Brashear court knowing they already had more contests played than points scored.

The game has brought the subject of sportsmanship front and center in high school sports again and brought up a natural question: How in the world does a high school basketball game end up in a shutout?

Now, it’s not the first shutout in district basketball. The previous time it happened was only seven years ago when the Ford City girls beat Leechburg, 56-0, and that game stoked opinions on sportsmanship. In 2013, the Serra girls beat Wilkinsburg, 28-0, but that game lasted only one quarter when Wilkinsburg left because of a snowstorm. Back in 1978, the Wilkinsburg boys shut out Kiski Area, 8-0, but Kiski Area held the ball in that game.

As for McMeekin, he is in his first year at Brashear and has coached at various levels. He believes he did everything possible not to run up the score against Carrick. He ordered his team not to fast break. He said he made them pass five times before attempting a shot in the second half and scored only 18 points in the final two quarters. He said he told his defense not to come past the 3-point line.

And hey, give the guy a break. He said he never realized Carrick didn’t have a point until a Raiders player attempted two free throws with 1.3 seconds left in the game.

“When I say I never paid attention to the scoreboard, I truly didn’t,” McMeekin said. “Not until she was shooting those foul shots and I was hoping she made one.”

I spoke with McMeekin on the phone, so I have no idea if his tongue was firmly planted in his cheek when he made that statement. Hey, Captain Obvious knows coaches at all levels never look at the scoreboard, right? Coaches never know how much time is remaining, right? And what coach looks at the scoreboard during a game? What does the score matter?

“My concern never went to the score and that’s a true story,” McMeekin said.

Actually, there would be a major difference if a team scored six points. Every year, it seems the WPIAL has girls games where a team scores four or six points. But a shutout?

You read the comments and come up with your own opinion about the situation.

“I never gave thought of how to let them score. That doesn’t even exist in my brain,” McMeekin said. “The idea was how to not run up the score.”

The backstory to this shutout is that Carrick played almost the entire game with four players. Lenny Ferency is also in his first year as coach and, due to injuries and disciplinary reasons, took only five players to the game. After the first dead ball, Ferency pulled one of the players out of the game because she wasn’t supposed to play for undisclosed reasons.

“I thought we had to start with five,” Ferency said. “Before we left on the bus before the game, I told my team that we would have to play with four players and ‘do you still want to go and play?’ They said they had been working hard and, ‘Yes, let’s do it.’

“I was hoping they would want to play. I thought it was a great teachable moment. Nowadays, kids aren’t built with enough grit. When things are down, they quit. My heart goes out to them because they earned my respect in a very prideful manner. They played hard until the final whistle. I’m not one who believes in everyone getting a participation trophy. But I believe in trying to overcome adversity, working hard and doing the right thing.”

I’ve coached a lot of basketball at many different levels and been on both ends of blowouts. By the middle of the third quarter, if an opponent hadn’t scored, I would’ve told my team, “We are not going to be that team that shuts out someone.”

You can let teams score without demoralizing them. Tell your players to play soft man-to-man, and as soon as an opponent starts dribbling toward the basket, step out of their way and let them get to a hoop for a layup. If they miss, let them grab the rebound and shoot again, and again, and again. Go take a quick shot at the other end and do the same thing on defense a number of times. You don’t have to give up 20 points. But how about just a few baskets?

But McMeekin said, “I would never let another team just score. That goes against everything I’ve been taught.”

That comment says a lot. For sure, there will be people in the public who will claim, “It’s not Brashear’s job to have Carrick score. Carrick needs to get better.”

That’s OK. But c’mon. Is there really anything wrong in letting a demoralized team score a few baskets?

“I want to make it clear that I am not judging the other coach,” Ferency said. “I’m not giving an opinion that he did the right or wrong thing.”

McMeekin is upset about the situation, claiming his integrity is being questioned. “You want to know my integrity? I drive from Hampton into the West End every day and pick up two girls for practice. That’s my integrity.”

I don’t know McMeekin and am not questioning his integrity. But maybe his judgment and other coaches who might be in similar situations in the future. Maybe all involved would do well to learn a thing or two about sportsmanship from a WPIAL girls soccer game in 2019 that involved Upper St. Clair and, coincidentally, Brashear.

The two teams got together for a group photo on the field afterward and Brashear’s Alexa Dinnocente had a social media post thanking Upper St. Clair for what the team did.

“Our intent was never to hold Carrick scoreless,” McMeekin said. “Our intent was to keep our team score down and all the while, try to get something beneficial out of the day. We use our gym time wisely and our daily goal is to get better.”