Betting on sports isn’t allowed by its players, even if injured

Published a few months ago in Football - 0 Comments 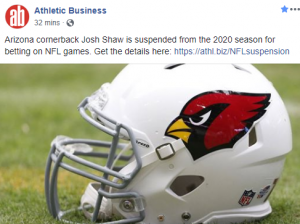 The NFL announced Friday that it has suspended Arizona Cardinals cornerback Josh Shaw through at least the 2020 season for betting on NFL games.

Shaw, who has been on injured reserve since suffering a shoulder injury in the preseason opener, reportedly bet on NFL games multiple times this season. The statement, which was released by NFL Commissioner Roger Goodell, said that the league’s investigation showed that no games were compromised, no inside information was used, and no other players or coaches knew of Shaw’s gambling.

"The continued success of the NFL depends directly on each of us doing everything necessary to safeguard the integrity of the game and the reputations of all who participate in the league. At the core of this responsibility is the longstanding principle that betting on NFL games, or on any element of a game, puts at risk the integrity of the game, damages public confidence in the NFL, and is forbidden under all circumstances," Goodell’s statement said. "If you work in the NFL in any capacity, you may not bet on NFL football."

NFL Network Insider Ian Rapoport reported that Shaw bet at a Las Vegas casino this fall, using his own player card and ID. Shaw is able to appeal the suspension within three days of the announcement. If the appeal is denied, he is eligible to petition for reinstatement on Feb. 15, 2021.

Shaw, 27, is in his fifth season since being drafted by Cincinnati in the fourth round of the 2015 draft. The 6-foot-1 defensive back out of USC split time with Tampa Bay and Kansas City last year before he was signed by the Cardinals in March to a one-year contract worth $850,000.

ESPN also reported that the NFL reminded teams of its gambling policy shortly before announcing Shaw’s suspension. The Cardinals were reportedly surprised by the suspension, as Shaw hasn’t had any regular contact with the Cardinals since being placed on injured reserve Aug. 25, 2019. Shaw is the first NFL player to be suspended for gambling since Baltimore Colts quarterback Art Schlichter in 1983.